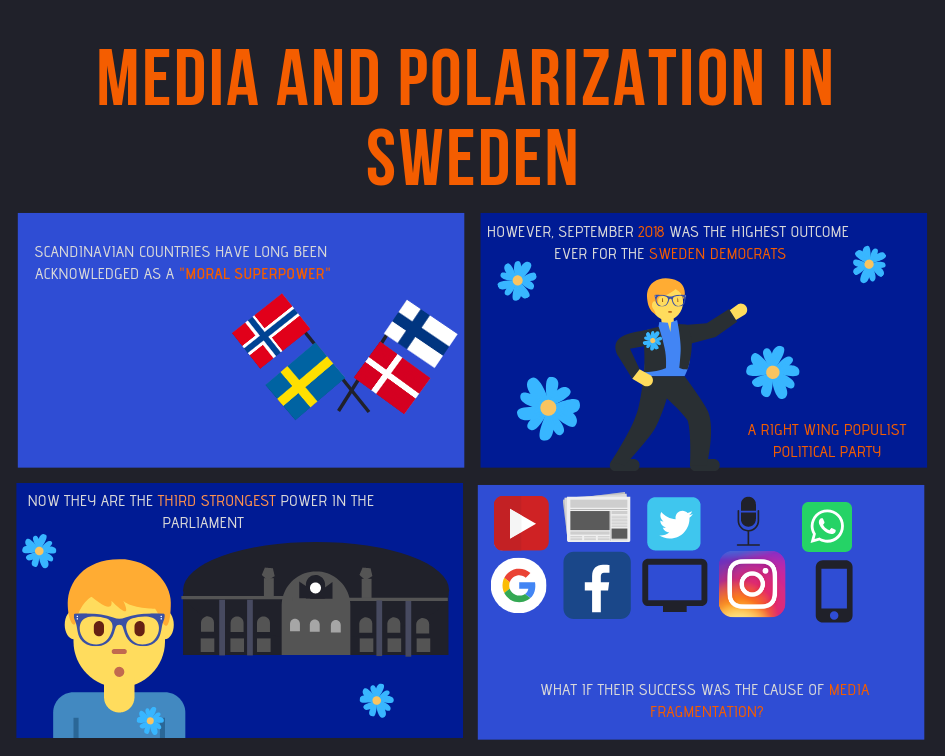 Scandinavian democracies have long been acknowledged to be the “moral superpowers” of European societies, states Christine Ingebritsen, Professor of Scandinavian Studies at the University of Washington. Stable welfare systems, consensus-oriented governments and a strong sense of solidarity within national communities characterized an image of the Scandinavian countries where social democratic center-left dominance has long been the norm. Media fragmentation and political polarization in combination with the rise of the Sweden Democrats threaten that particular image.

Last year’s general elections in Finland and Denmark demonstrated that this perception has begun to crumble and it is perhaps less rigid than expected. Additionally, in September 2018, the general election for the Swedish Riksdag led to the highest outcome ever for a party with a misleading name: the Sweden Democrats. First established in 1988 as a neo-Nazi movement this party gained access to the Riksdag in 2010 (5.7%). Now, the Sweden Democrats constitute the third strongest power (17,6%) in the eight-party parliament. Consequently, many saw it as evidence of the rise of yet another European far-right populist, anti-immigrant and nationalist party.

While the Sweden Democrats celebrated their highest ever electoral success, these numbers, however, are lower than expected. In particular, YouGov predicted an outcome of least 24.8% of the vote just one week before the elections. Therefore, does the electoral outcome of the Sweden Democrats really stand for, as Pawel Zerka of the European Council on Foreign Relations puts it, another case of astonishing right-wing populist support in the EU?

In line with Lijpharts concept, Sweden with its pluralist party system is less prone to polarization than a two-party system, for example the US-American. Nonetheless, the 2018 elections and the remarkable outcome for the Sweden Democrats challenges whether the Swedish society is in fact divided between an established social democratic and a highly nationalist, exclusive pole. Despite the multi-party system in the Swedish Riksdag, an antagonistic frontier between populists and political actors who refuse populism as a strategy and discourse create a de facto polarization between those two blocs.

In 2015, Sweden accepted more than 162 000 asylum seekers, a little over 1.5 % relative to Sweden’s population of ten million people. This new high has allegedly disrupted the Swedish tradition of political consensus of being an immigration country and added onto a growing perception of a crisis of the welfare system.

The Sweden Democrats were an integral part of the predominantly negative and nationalist tone in this debate. They could shape the discourse to a much greater extent than any other political figure, even activating former non-voters to the polls. According to Statistics Sweden, voter turnout in the recent general elections was 87,2 %, indeed the highest it has ever been since 1985.

How do the Sweden Democrats influence public discourse in their favor in such an effective way while the moderate mainstream parties increasingly lose trust?

The Sweden Democrats take advantage of new media and communication channels much more effectively than the mainstream parties. Simplified demands and claims are embedded into a reactionary narrative and simplistic solutions which is in the logic of the Sweden Democrats – the refusal of excessive immigration into the Swedish welfare system. By constructing immigration as an alleged problem for Swedish society, the Sweden Democrats polarize the discourse around this cleavage. Interestingly enough, this discourse often seems to go beyond established news coverage and is foremost located at new and alternative media outlets where provocative, divisive opinions find reinforcement and amplification.

Media fragmentation – an opportunity for demand articulation at the political periphery?

A popular explanation for the rise of new niche media outlets is based upon a decreased trust in established news sources. Where trust in common news organizations decreases and new niche outlets gain popularity among specific audience groups, media systems become more fragmented.

The Pew Research Center data on trust in the Swedish “Dagens Nyheter” (“Daily News”) is a point in case as Swedes with populist views are 26% less likely to trust this formerly popular and most importantly, common news source. Swedes whose main source of news consumption are still the public broadcasters such as the SVT public channels communicate a growing dissatisfaction with the topics covered. According to a report by the UN High Commission for Refugees released in 2015, Swedish press portrayal of incoming refugees has been characterized by a “humanitarian lens”, through which the coverage of immigrants tends to be more “empathetic, often framing their pieces as human interest stories.”

Hence, audiences with anti-immigrant sentiments may have resorted to social media instead. The latter composes home turf for the Sweden Democrats who covered “immigration” in a radical contrast to the mainstream news. Social media platforms allow any political organization to bypass traditional journalistic gatekeeping of news and media content. Without being questioned, held accountable or fact checked, organizations can produce content and reach their audience.

Facebook is the main communication channel not only for the Sweden Democrats but also for other similar populist and nationalist parties. In fact, their entire online presence dominates all political interaction by Swedish political parties on social media. Especially during their recent campaign, party leader Jimmie Åkesson polarized public discourse with nationalist anti-immigration statements such as:

“We would rather spend 6 billion Swedish Krona (SEK) on welfare instead of on 9000 adult Afghan men with no need for protection.”

The toxicity of social platforms lies to a great extent in their algorithms that perpetually show users’ new engaging content based on their previous clicks dragging them down into a feedback-loop. A study conducted by the University of Warwick shows that heavier use of Facebook is directly linked to a higher occurrence of racial violence, one reason being Facebook’s ability to confound the users’ attitude towards others, moral judgement and perception of reality.

Whilst being an opportunity for demand articulation and interest advocacy in general, social networks also constitute one of today’s greatest challenges to democratic systems. Where niche and radical demands and policy claims were marginalized or simply overlooked by public discourse or news agendas in the past, social media nowadays enhances those claims to a distorted reality in which the lack of contention presents a fertile ground for resentments and xenophobic stereotypes. Right-wing populists as the Sweden Democrats effectively utilize these dynamics to gain visibility and popularity.

Has the Fragmented Media Environment Enabled the Rise of the Sweden Democrats?

According to political scientist Paolo Mancini, mainstream political parties have had difficulties adapting to the fragmented media landscape  as new technologies have been captured by social movements “that are driven by affiliation with and sympathy for new values and attitudes that are of very different nature from the previous political ones”. Failing to utilize the opportunities of social media to (re-)connect with voters and overlooking demands articulated by citizens via these communication channels leaves the field open for radical politicians like Åkesson.

The times of a mutual, shared media environment among citizens have passed as audiences seek self-reinforcing viewpoints rather than ‘’nightly news’’ broadcast. Echo chambers and confirmation bias decrease the receptivity and openness to differentiated news consumption. News consumption has developed into a highly diverse and fragmented field with algorithms playing an important new role in deciding what is consumed on social media on a daily basis. Radical forces are aware of the opportunities social media provide and as a study conducted by Adam Mickiewicz University indicates, populist groups are highly skilled in taking advantage of them as a direct line to their target audience.

If moderate parties seek to regain trust and popular support among the electorate, they need to attribute relevance to the manifold demands and voices articulated via social media.

On the one hand, diverse communication channels enable previously unheard voices to articulate their demands. On the other hand, they lead to polarizing discourse in self-amplifying echo chambers and popularity of radical parties. In the light of the European Elections being only a few months away, civic society should be aware of factual decoupled discourses in a fragmented and polarized media environment and its risks for liberal democracy as we know it.

UNHCR (2015). Press Coverage of the Refugee and Migrant Crisis in the EU: A Content Analysis of Five European Countries. Online: 15.3.2019